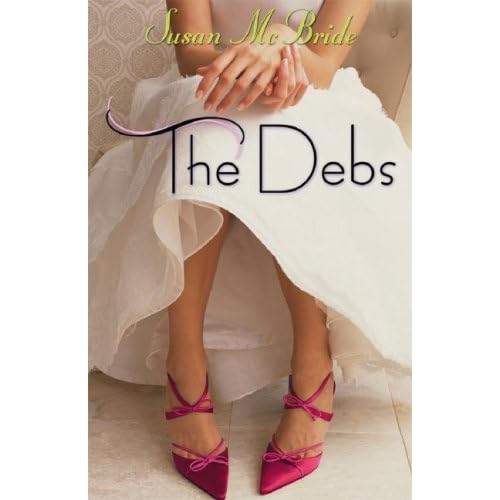 Welcome to Barrie Summy's The Book Review Club, April edition. This month, I want to talk about THE DEBS by Susan McBride.

Technically, Susan McBride isn't a new author. Actually, she's the author of the successful Debutante Dropout mysteries (which I enjoyed). But THE DEBS is her first Young Adult novel, so it's a change of direction and I was interested to see how it turned out. McBride is also launching a new "women's fiction" series next year called The Cougar Club, about 40-something women dating younger men. I'm anxiously awaiting that one, too, because McBride is a (barely) 40-something woman married to a (slightly) younger man . . . who just happens to be a guy with whom I went to college and played hockey.

I have met Susan. We're BFFs, so I can use her first name like that. (Not really. I've met her, like, twice. But she's really really nice and has this way of making you feel like you really ARE her friend, even if you just met her in a crowded public place.) So I want her to succeed. But I wasn't sure what to expect from The Debs . . .

And I was even less sure when I started reading. The brand names were dropping so thick and fast, I couldn't find the story. Oh, wait, there it is. Holy cow, what's up with this girl?! She's our first main POV character and she's blowing off her friends to go have sex with a guy who all her friends know is a complete jerk who treats her terribly. Niiiice.

Or so I thought. And then I realized that I'd finished the book in one sitting. And I was looking around for the next one, LOVE, LIES AND TEXAS DIPS, which I know doesn't come out until June. For the next several days, I kept drifting back to the characters in my mind and thinking about their situations, their challenges, their goals.

The girls had become real to me, and the guys had too. I have a theory about what's really going on with Avery, but I'm still trying to figure out Dillon's story. Even The Debs themselves grew on me. And I have hopes that college will help them figure out their priorities . . . especially Mac (the brain) and Ginger (the environmentalist) who I found most sympathetic.

Though I also found myself caring about Laura (the one who ditched her friends for a guy). And even "The Queen of Mean, Jo Lynn [who] is so easy to hate" (according to one review). I thought Jo Lynn was going to be a textbook Mean Girl, but she isn't. She's mean, yes, but she's sympathetic, too. And it's not like Laura, Mac, and Ginger are perfectly nice. They call Jo Lynn and her friends The Bimbo Squad.

I think my favorite thing about THE DEBS was how real the characters seemed. The boys' behavior was completely mysterious and confusing to the girls, and not easily deciphered by readers, either. The girls themselves were a mixture of child and woman, sometimes seeming so young and sometimes seeming far too old. In short, they were teenagers.

They were all older and more sophisticated than I was at that age, for sure. But given their lifestyles, I found that completely realistic. I saw those kids from afar, when I was in high school. They didn't go to my school, necessarily, and we didn't often attend the same parties, but occasionally we'd cross paths at a golf tournament. Even public schools can have golf teams.

Shortly after finishing THE DEBS I read Orson Scott Card's new direct sequel to ENDER'S GAME, ENDER IN EXILE. After reading that, I was even more impressed with Susan McBride's grasp of teenage life.

McBride's teenagers aren't stupid. They're intelligent and passionate. But they're not all philosophers, either. They're not exactly the same as they were at 6 and will be at 60. They're kids. They have different interests and priorities than they had last year or they'll have next year. They make dumb choices and lack foresight. They care passionately about things. They're . . . interesting.

It depresses me that this is what t(w)eenage girls want to read, though. Brand-name dropping novels about ultra-rich, snobby, classist kids casually having sex, drinking, doing drugs, and being otherwise unpleasant.

It seems that this is what girls (and women) want to read, though, and McBride serves it up nicely. But she slips a little bit of perspective into the story throughout. She creates the world in which the characters live, and she doesn't ridicule it, but she neither does she condone it or its excesses.

Well done, deftly handled. Thanks for the fun read!