Muriel Barbery's The Elegance of the Hedgehog 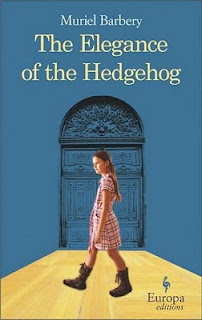 My parents have been married for over 40 years and they're still very happy together.  But my mother once confessed to me that she fears she married my father under false pretenses.  It started like this.  When she was a sophomore in college my mother took a train to visit her older brother at seminary in Chicago.  Her brother didn't have a car, so he asked his buddy to take him to go pick up his sister at Union Station.

From there my parents' relationship progressed mainly through letters.  My father, a graduate student in his mid-twenties, enjoyed chess and philosophical debates.  My mother, still at that time a teenager, wanted to impress him.  So she worked hard on her letters and studied up on her philosophy.  But considering the nature of things - Do universals exist, or only singular things? - is not a true interest of my mother's.

Fast forward, then, to last year when a woman in my book club began reading Muriel Barbery's The Elegance of the Hedgehog.  She enjoyed the novel very much and felt inspired to tackle several classics she'd missed along the way, including Anna Karenina.  This caught my interest, because I was - and still am - reading Jack Murnighan's Beowulf at the Beach: What to love and What to Skip in Literature's 50 Greatest Hits.  I too have been inspired to go back and pick up a few classics for fun.

But I needed a bit more motivation before launching into Tolstoy, to I eagerly borrowed The Elegance of the Hedgehog.  (Some of the characters in the novel are big fans of 19th century Russian literature.)  Unfortunately, I got to Murnighan's chapter on Flaubert's Madame Bovary at the same time I was beginning Hedgehog.  I've read Madame Bovary at least twice, and I detest it.  I'd rather shove toothpicks under my fingernails than read it again; the sensation is much the same.  And this is how Murnighan starts his chapter on Flaubert:

"If you were to read them in quick succession, paying attention mostly to the plot (and nodding off now and then mid-sentence), you might not be able to tell Madame Bovary and Anna Karenina apart."

But the premise of The Elegance of the Hedgehog grabbed me from the beginning so I persisted.  A middle-aged French concierge pretends to be much less intelligent and cultured than she is to avoid notice from the tenants in her building.  One of those tenants, an extremely bright and precocious 12-year-old girl, has decided that she doesn't ever want to be like the stupid grown-ups around her and is considering suicide.  The story progresses through their journal entries.  And I can't tell you how it ends, because I still have 50 pages left to read.  (No spoilers, please!)

This is a very good novel, and an enjoyable read.  Especially if you enjoy philosophy.  I'm hesitant to talk too much about the language and writing, because I'm reading an English translation (the original is in French).  And, frankly, I'm more like my mother in this way than I am like my father: lengthy philosophical debates are not my thing.  I realize I've been sort of skimming for a few paragraphs, waiting for the plot to pick up again.  Then I force myself to go back, reread slowly, and pay attention.

"Oh, you're reading The Elegance of the Hedgehog," my mother observed.  "I did not enjoy that book. Too much philosophical pondering for me."

"I enjoyed it," my father replied mildly.  "For pretty much the exact reasons your mother did not."

Barbery does not talk down to children, and she really gets that kids can understand a lot more than we give them credit for.  I found 12-year-old Paloma pretty believable.  In Beowulf at the Beach, on the other hand, Murnighan repeatedly insists that we ruin literature for people by forcing it onto high school kids who can't possibly understand it. Au contraire. In high school I read a lot of philosophy (and classical novels, too: Dickens, Austen, the Brontes, and so forth) and I loved it all, even when I hated it.  I did understand Kant and Machiavelli and Marx and Descartes and Plato.  In fact, I read and understood and pondered and cared so much more then than I do now, when my mind is full of more pressing concerns like remembering to change the ceiling fans from their summer to winter settings.  I'm no longer willing to work so hard to pull meaning from the text.

The Elegance of the Hedgehog is a novel about people who like discussing literature and philosophy.  But even if you haven't read Tolstoy and don't enjoy pondering the existence of universality, it's still a good story.  And it's a book about smart people hiding their intelligence to avoid notice but eventually recognizing each other and making connections despite the barriers imposed by class, station, age, and race.  And that is the story I loved to read.