I don't think of myself as creative.  I think of myself more as a reteller or a modify-er or an adapter than a creator of original content.  I'm not sure what it means to be original, exactly.  I write novels.  But, is any story truly original?  For Mother-Son Glow Night at the elementary school, my son and I wore all black instead of neon on all white.  We took bright tape and made ourselves into colorful stick figures--love those black lights.  But, maybe I saw a picture of something like that somewhere?  And, I throw birthday parties.  Before kids, Paul and I threw themed parties for holidays and Harry Potter book/movies launches.  These days, it's mostly kid parties.  We've hosted The Lion the Witch, and the Wardrobe, Peter Pan/Tinker Bell, Super Mario, How to Train Your Dragon, firefighter, My Little Pony, Alton Brown's Good Eats (okay, that was creative), Angelina Ballerina, Sing, Warrior Cats, and Harry Potter.

This January, we recreated The Hunger Games as a 13th birthday party.

When guests arrived, they wrote their names on slips of paper and dropped those into a glass bowl for the reaping. They each chose a district and decorated a jumpsuit based their district's specialization.  The kids got really creative!  They modeled their attire, and the most creative uniform earned its creator a prize. 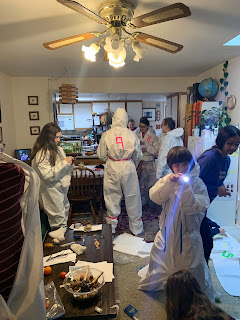 The next activity was makeup.  Tributes made up themselves or each other, and they could stencil on tattoos, do a beauty makeup, or practice their camouflaging skills.  Another judging, another prize. (The prizes were framed posters of quotes from the books.) 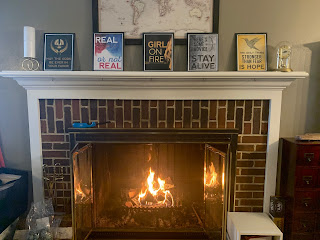 Now that they were all made-up and costumed, they had one-on-one interviews with Caesar Flickerman.  This activity was a version of the cannot-tell-a-lie/don't smile game.  Caesar shared with the audience one ridiculous thing about each tribute, and the tribute had to pretend it was true and elaborate on their supposed skill--without cracking up.  This was hilarious.  The winner (a girl who apparently chews others' fingernails when nervous) won a prize. 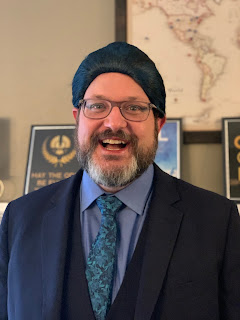 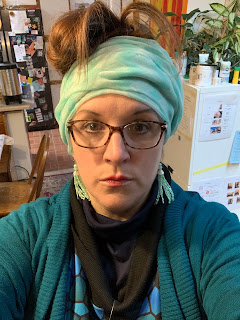 Enough stalling.  Time for the arena!  Decked out in their clothes-protecting coveralls, tributes entered the arena (about an acre and a half encompassing our yard and the yards of our two closest neighbors).  They were each armed with colored chalk powder (think Holi or a color run).  A pile of silver bags lay in the middle of the driveway at the start--the cornucopia.  Silver bags containing additional weaponry (liquid/powdered chalks and squirt bottles/guns), water bottles, and beef jerky lay scattered around the arena.  Every 15 minutes or so marked a new day, and if contestants went two days without finding food or water, they died.  Dead tributes--lost to hunger or battle--could reenter the arena as "mutts."  The contest lasted about 6 days. 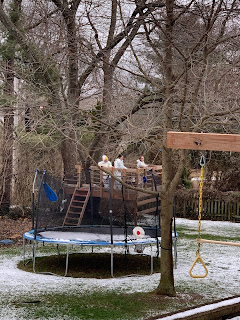 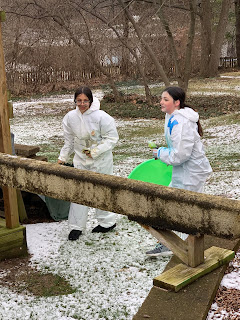 Afterwards, cold kids warmed up with hot chocolate inside, and we moved on to the Victor's Feast.  In addition to cake and ice cream, attendees enjoyed capital stew with wild rice, "Peeta" bread, Prim's goat cheese, and nightlock berries (blueberries and blackberries).  In the center of the table was a tiny, glass goblet containing an emesis inducer. (It was just vinegar, and the kids enjoyed daring each other to try it.) 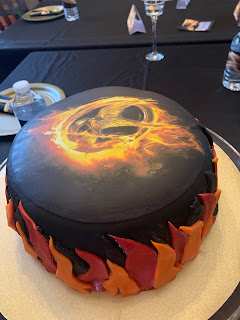 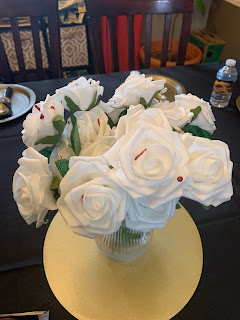 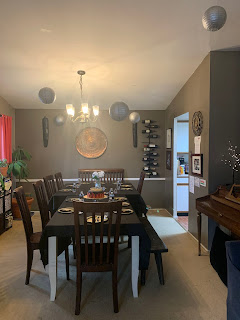 Once full, they moved on to "tributes for the Capital," or gifts for the birthday girl.  As they left, guests took silver "sponsor gifts" home with them.  These were the party favors and contained soup, bread from Mellark bakery, burn ointment, bandages, tracker-jacker repellent, and tracker-jacker antidote.  They also got a photo taken immediately after The Hunger Games, when they were muddy, cold, and covered in colored chalk. 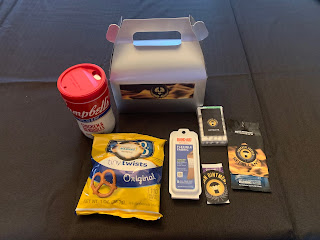